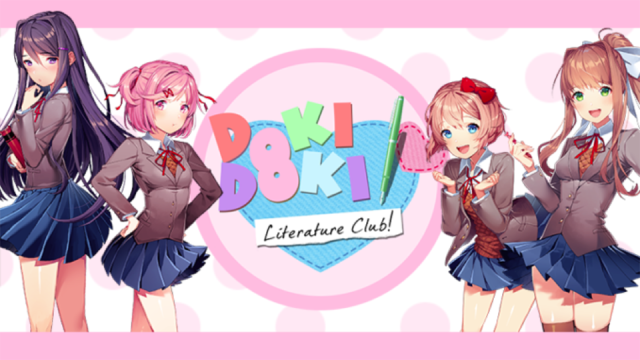 It starts out innocent enough. The home page plays cheery music with four cutely-drawn anime schoolgirls in short skirts frozen in the act of turning toward the player against a pink and white polka-dotted background. Nothing seems out of place as the game starts. It’s just like any dating simulator, right?

Indie horror game “Doki Doki Literature Club” has gathered a cult following since its 2017 release. With an endless stream of mods, patches, and DLCs added to the game, along with a surplus of fan-generated content available for consumption on the internet, the hype around “DDLC” has yet to die out.

The gameplay style is simple. Taking after Japanese visual-novel style games, characters appear on the screen with dialogue running across the bottom. The player will be prompted to choose between two or three responses every so often. In traditional dating simulators (which is what DDLC markets itself as despite the warning to those who are easily disturbed at the bottom of the game’s download page), the player’s decisions take them along a plot-line catered towards building a relationship with the character of their favorite character. This is where “Doki Doki Literature Club” works much differently.

The player takes on the character of a high-school aged boy looking to join a club at his school. Childhood friend Sayori invites him to join the literature club, where he is introduced to the other girls; Yuri, Natsuki, and Monika.

Soon after the player joins the club, the girls ask him to read their original poems. Each poem foreshadows the events soon to come, with mentions of depression and domestic abuse sprinkled between the lines.

This is where things start to get much darker. Sayori reveals to the protagonist that she is depressed, and her poems thereafter consist of her begging someone to get out of her head.

Eventually, after the protagonist grows increasingly concerned about Sayori not answering his text messages, he runs to her house. The player opens Sayori’s bedroom door, only to find the peach-haired girl hanging from a noose in her bedroom. The player wonders if he could have saved her by making different decisions. The game restarts.

When the game is re-opened, all previous save files are gone. Instead, the game starts right from the beginning, but every scene where Sayori originally appeared is replaced with glitches. The protagonist comments about feeling as if something is missing.

Disturbing scenes begin popping up far more frequently from here on out. The game rewinds after the player finds Yuri cutting herself, Natsuki’s face appears with X’s over her eyes and a block over her mouth, and the player is unable to make decisions which do not favor the club president, Monika. After another restart of the game, these glitches appear less, but the behavior of the characters takes over as the game’s main scare-factor.

Yuri becomes increasingly obsessive, giving the player an unintelligible poem stained with her “essence” and telling the protagonist that she wants to climb inside his skin. After confessing her feelings to the player, she asks if he will be with her. It doesn’t matter whether the protagonist picks yes or no. Yuri begins laughing maniacally, pulls out a knife, and begins stabbing herself to death. The player is left on the screen with Yuri’s dead body for nearly ten minutes afterwards. With the sun rising and setting from the classroom window, it is evident that two full days pass in the game.

Finally, it’s Monday. Natsuki enters the room, but promptly vomits and runs out after seeing Yuri’s dead body. When Monika arrives on the other hand, she is unfazed. The game restarts. All traces of the other girls are gone and the previously cheery background music instead sounds sinister. The player is placed in the classroom with Monika sitting across a desk from him.

Monika will continue speaking to the player about various topics until her character file is manually deleted from the game. The game restarts, all the other characters are restored besides Monika. Multiple endings are available to the player depending on actions that are not related to the plot; like whether the game was played continuously without exiting.

Finally, the player’s actions begin to have an effect on the plot. Needless to say, the idea of a murderous anime schoolgirl monitoring the player’s computer activity, combined with the terrifying imagery of DDLC is nightmare inducing.